I read about the Collings Foundation display of WWII bombers in the News Journal and Mary and I decided to take Tim for a ride on the B-17. It was against our somewhat frugal nature to do it, but it was worth every cent, and tax deductible to boot! (Nice rationalization!) . Anyways, we got up there about 2:30 and hung around going through the displays of a B-24, B-25 and the Mac Daddy, B-17 until the flight at 5:30. It was interesting going through them and thinking about what it took to be an Airman or pilot going to war in the planes. Tim and I talked to two WWII veteran airmen while we were milling about. One was a p-47 pilot that did duty near the end of the war shooting up trains and transportation targets in Italy and France. The other was a B-17 Master Sgt. who talked about getting frostbite twice while on missions during his 3 year tour. Interesting folks!
We also talked to a gentleman whose father flew B-26s for 61 missions, volunteering for the second tour.

The planes clearly weren’t designed for 40 something guys (or pregnant women either. A lady about 6-7 months preggers went through immediately after me. God knows how she got over the bomb bay catwalk!) to get around, but I managed to get through it. Walking on the catwalk through the bomb bays was cool, especially after seeing war movies of guys doing stuff up there with open doors. 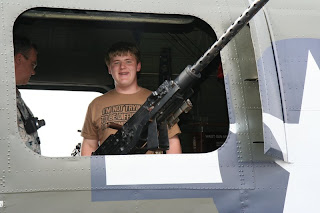 Tim was in the waist gunner position on the B- 24. It was a tight fit getting into the back of the aircraft to get to this position. 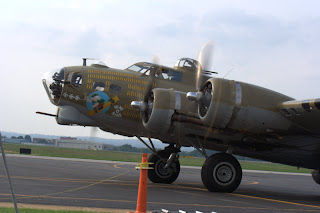 The B-17 with engines warming up. 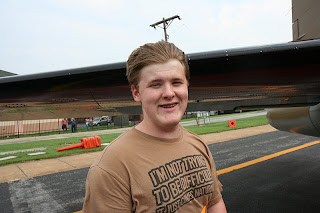 No, Tim wasn’t going for the Eddie Munster look, we were boarding the B-17 before take off, in the prop wash from two 1200 horsepower engines. Yeah, it was awesome! 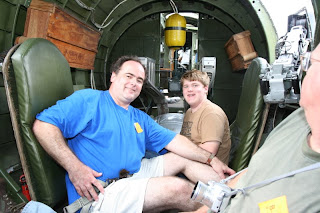 Inside the aircraft. I don’t know if the seats were original equipment or not, but we were seated every other person, no windows to look out in the back where we were. We could look sort of up and out through the plexiglass windows where the waist guns were mounted. The gunners must have done a sort of dance to get around each other in the heat of action. 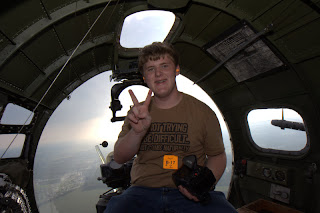 As soon as we were airborne, we were allowed to move about the aircraft. We made our way forward, over the bomb bay to the pilots compartment, then under that to get to the bombardiers position. That was the best seat in the house! It was amazing looking through the dome down. There was room for 4 of us to hang out and wait a chance to sit in the seat and take it all in. Awesome! It was pretty cool looking through the upper turrent over the top of the airplane. I’m betting it wasn’t as much fun when your life depended on it! 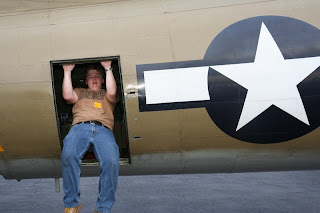 Tim exiting the plane at the end of the ride.

My advice: Go for a ride on one or more of these guys if you get the chance!