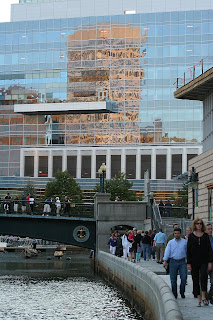 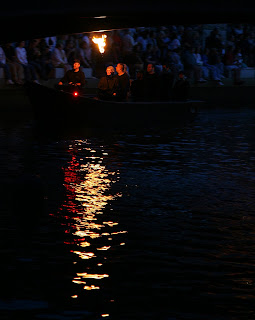 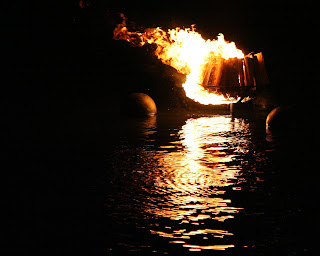 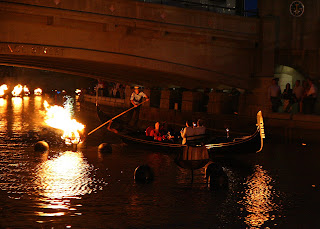 We went to Providence RI for the Waterfire event. It was interesting, and kind of strange. Some of my random thoughts and impressions: Providence spent around 140 million bucks to rearrange and resurrect some rivers in downtown to set up the waterfire shows. Massive building downtown has also occurred so I guess it was worth spending public funds to “fix” the river(s). The start of the event has some boats moving upstream carrying lots of folks dressed in black, while Lord of the Ringsish (there I go makin up words again) sounding music is played. It has a medevil, evil tone to it… kind of strange. The music kind of changes and the boats light the braziers up and down the river. The smoke fills the air with a smell that is a cross between wood and kerosene, though it’s not overwhelming. The heat from the fires is noticable on the riverwalk area, even in the summer.
The event draws it’s share of what I’ll call ‘unusual’ folks. I saw a pair of men, dressed as vampires that were apparently a couple… I wasn’t quick enough on the draw to ask to take their picture. I suppose if they were really vampires I wouldn’t have seen anyting in the photos! It wasn’t clear to me why there were Venetian style gondoliers boating people around, but… whatever. Some young ladies on shore had gotten into some adult beverages and started singing “O Solo mio” with gusto if not talent when one of the gondolas passed.

I liked the Waterfire.