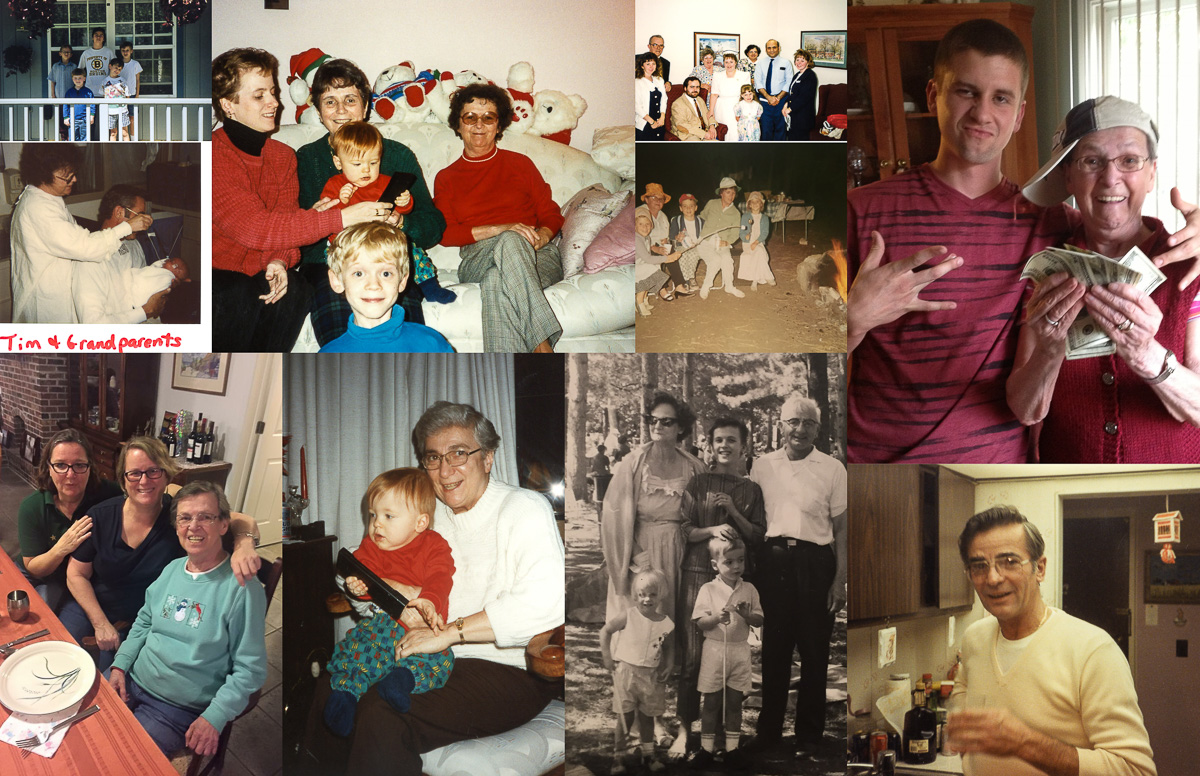 I did these collages last year in cooperation with several family members to make laminated place-mats for my mom for Christmas. We secretly collected about 750 photos from various eras and collections and I whittled them down to about 240 to use for this project. Collecting and then thinning them down was the hardest part! I picked 240 as the target by figuring I needed 10 per side, 2 sides per placemat and 12 placemats in total at the end. I might have been able to use all the photos,but they would have been postage stamp size and lost their impacts.

I made a collection in Lightroom of the winning photos.  Then, in the Lightroom print section,  I created a template of ten photos in a 11×17 layout as that was the maximum size that Staples could laminate in the store. Once the template was made, I used the slide strip function in the print mode to pick photos at random from the collection of 240 and dragged them one by one into the template. After I dragged each one, I marked it with a purple flag to denote that I had used that photo already. I considered just trying to do collages with say, my mom and dad as the focal point on one and some family member on another, but I decided to do random over the about 70 years worth of photos to make it more fun to look at and share before and after family dinners at moms or really when we’re just hanging out there. The kitchen is kind of the focal point in our family, as it is in many. Once the ten photos were in place, I printed the file to a jpg file (300 dpi) in a folder on my desktop.  About half way through the 24 collages, I created a new template that was slightly different so they wouldn’t all look alike.

There were a few gaps in some of the images I created because I ended up tweaking some of the layouts to match the photos. Like the proverbial wall paper job that no one else notices the errors on, I’m pretty sure no one else in the family noticed. All in all, it took a ton of time to collect and then narrow down the photos, but the actual file creation, once selected was maybe 2 hours or so?

The following day I took the files on a flash drive to the local Staples store and a very helpful young lady helped us out. She suggested we print 12 prints front and back instead of my original idea to print 24 and try to line them up. She told us the next day that she ended up having to create PDF files for it to work, but they came out great! I suppose I could try to figure out how to make the pdfs to make it easier for the printing expert, and maybe I will next time.  She had them ready the next day and the cost was like $60 for 12 celebrations of memory that are going to last a long time! A bargain!

Give it a go if you have Lightroom. If not, maybe I can help you out?