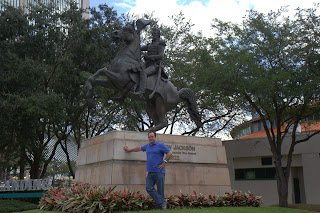 We were hanging out in Downtown Jacksonville, and I came across the statue of Andrew Jackson. Linda took the pic. Some guy walking by offered to take the photo, but I told him it wasn’t necessary, she was my sister. Several people around us got a chuckle out of it. 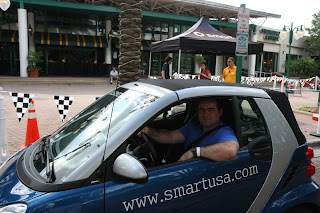 Smart cars are coming to the US from Europe next year. They were doing free test drives downtown, so I went for one. I had read an article in Car and Driver (probably) about them and the author liked em. I thought that it was fun to drive, especially in the city. From the inside, I had as much room for me as I do in my Mercury. Not sure about logging long hours in them though. They are going to run around $17K. For that much, I’d probably want a 4 door Hyundai with a trunk or something. 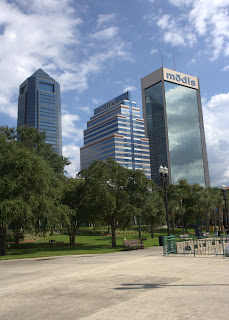 Cool colors and reflections in the Modis building.