I met Natasha Rodríguez , a skilled self-taught painter, at the Dover Art League a few weeks back, and asked if she’d be interested in participating in this project.  I got a chance to visit with her today in her home living room where she does her paintings in a very small corner. We also checked out her awesome deck, where she paints when it’s decent out.  Natasha’s home is filled with many beautiful photos and wall hangings. Art is in her blood!
Natasha’s day job is as a Nurse working with folks in  drug rehab.  We talked a little about how her father’s experiences with drugs and AIDs affected her career decision and some of the tough things she’s seen in her  job.

I tried something a little different for the project this time in that I sent some questions to Natasha to get her responses to so I could use them for this post.

Natasha revealed a lot in her answers. More than I might have. She was darn brave to share it. I was concerned about sharing her brutal truths because I started this studio project with the idea of being more “sunshine and happiness”and “isn’t this a cool person and workspace that few people know we’ve got such talented artists in the area?” theme. But, nothing is ever that simple, now is it? Part of what art is supposed to do, in my view, is to tell the truth. Just be real. Well, you can’t get more real than her answers.
Here are the questions in bold and her responses italicized. She added a question, and it’s bolded and italicized.

What kinds of art do you do?

I use Acrylic on Canvas and as of lately I have been painting a lot of portraits that portray humans from around the world.  I like to highlight on the different ethnicities…  I have also done abstract painting, landscapes and botanicals.

Is there something that drives your art?

It is a release for me…a release of emotion…an outlet.  When I’m feeling sad…painting is my therapy…when I’m happy…painting is a way for me to share my happiness.  I use to have a love/ hate relationship with my art because I would start on something..and if it didn’t flow…I would abandon the piece..for months..even years.  And doing this…would get under my skin…but I would refuse to go back to that piece because it no longer spoke to me.  Then sometimes…I would start a piece..and frantically work on it…won’t stop to eat..drink..just obsessively work on it until completion.

Overall, as of very recently, I have found a healthier/ happier medium between the both and can paint with much more ease.  Though, my emotions still are the driving force for painting.
How long have you been doing it?

As a little little girl, I have always been interested in art.  My father was my big inspiration because he, himself, was an artist (painter and photographer).  He had an ability to see beauty in many things around him in our world..and I noticed I had that same eye, same appreciation in the beauty of many things.  He introduced me to the artwork of Norman Rockwell and many other artists.  I actually still have a drawing I did in colored pencil of one of Rockwell’s paintings…concentration on a woman sitting in a rumble seat.  I was maybe 9 or 10 when I drew it.  I have always dabbled with sketching and have painted a few things for friends in 2007.  It was in 2011 that I started really diving into my art.  I started building up my clientele..doing commission work for people around the states.

In 2012, my world became a horrendous struggle from there up until very recently…so I almost completely fell off from painting all together.

Well…a lot of craziness.  I will try to sum it up if that’s even possible.  In 2010 I had left a terrible, emotionally abusive marriage.  I know there are 3 sides to every story…Mine..His..and the Truth…but..I’m here to tell you…mine IS the truth.  My ex-“husband” had taken me to court for sole custody of our daughter in 2012…whom he hadn’t seen for over a year due to a deployment.  I had already restarted my life..was in another relationship and actually pregnant at the time.  I didn’t want my ex to know any aspect of my life because he was mentally sick and would stalk me so bad that even the military put a No contact order on him..which he continued to break..hence them deciding to send him to Korea for a year in hopes that he would: 1: not be able stalk and torment me and 2. maybe “get over me”.  Well moving forward…the day before court in 2012, he requested he see our daughter for a few hours to “spend time with her”.  Stupidly and naively I let him..and the next day in court he came suited up with a lawyer and told the judge that our daughter told him that my current boyfriend hits on my then 4 year old daughter.  Which is not true at all, but of course the judge pulls up everyone’s criminal history..and unfortunately my then boyfriend had an extensive criminal background.  So without further investigation of my home and without getting a child psychologist or DFS involved to evaluate my daughter, the judge ordered joint custody and gave my ex primary placement.  The very next day I had to bring my daughter to the courts and turn her over to her father.  This completely completely broke me. All this..for my ex to give me back my daughter 6 months later.

Then in the summer of 2013, my then 10 year old son came out and told me while I was married to my daughter’s father he was being raped by him  when he was four years old.  Delaware dropped the ball on this..so the military picked up the case but because of “lack of evidence”…he was found not guilty for raping my child.Then in 2014, I was not only dealing with the blatant injustice for my son but I was back in custody court and my ex was trying to get sole custody of Sonya again.  Thank God, I was given primary placement this time…but unfortunately they had given us joint custody with him getting unsupervised visits with my daughter.  I’m here to tell you, there is something sickly wrong with the justice system and our family courts.  After all this…almost 2 years now, my ex has not ONCE tried to see my daughter or have her for visitation.  And for that…I am sooo very grateful.

Here we are in 2016, getting our life back together…my children are with me…they are SAFE…they are happy children, they are flourishing…and thank God they are resilient!  So here I am now…finding inner peace…working…going back to school..and creating art!  We take it day by day…and our small steps have allowed up to put many, many miles of horrible days behind us.

When I was in school I always excelled in Art class…won all the awards…lol.  In high school Art I joined the Art Club..but didn’t fare to well because I got bored with instructions and having to “follow what the teacher said”.  I liked the be free with my art..and that is also how I like to live.

What’s your favorite kind to do? Why?

I love painting people.  Especially the eyes.  There is so much to the eyes…they can tell a thousand stories with no words…many people don’t get that.  I do…and I like to concentrate on that…

Do you have a favorite piece?

All my pieces I love… but I have to say my most recent one is my favorite.  It’s a selfie! (Self portrait).  I was able to incorporate Mi Orgullo (My Pride).  I’m 100 percent Puerto Rican- though I was born in Los Angeles.  My Mother is from New Jersey, my Father from New York and both maternal and paternal grandparents are from Puerto Rico.  I have always loved learning about mi cultura (my culture) and the history of it.  So in this specific painting I was able to incorporate some Taino symbols. Tainos are the original Indians of Puerto Rico..and actually all of the Caribbean. I also added El Coqui…which is the frog indigenous to Puerto Rico.  In addition you will find above me on a branch La Reina Mora which is another indigenous species to La Isla Del Encanto (The Enchanted Island).

With this particular piece I would like to say the work of my most favorite artist is what also inspired me to create this piece as well.  Her name is Frida Kahlo.  She was a Mexican artist who actually was known for her self portraits and bright vivid paintings that were very raw and unapologetic.

How can I find you online?

Right now I am on Instagram where I post my work.  You can look me up on Instagram as artedenatasha  My actual website is in the works as of right now.  I will keep you posted though.

Do you have a series or theme you’re working on now?

I want to work on more portraits of humans from all over the globe.  As of right now, I am starting to get swamped with clients wanting me to create portraits and different pieces for them. 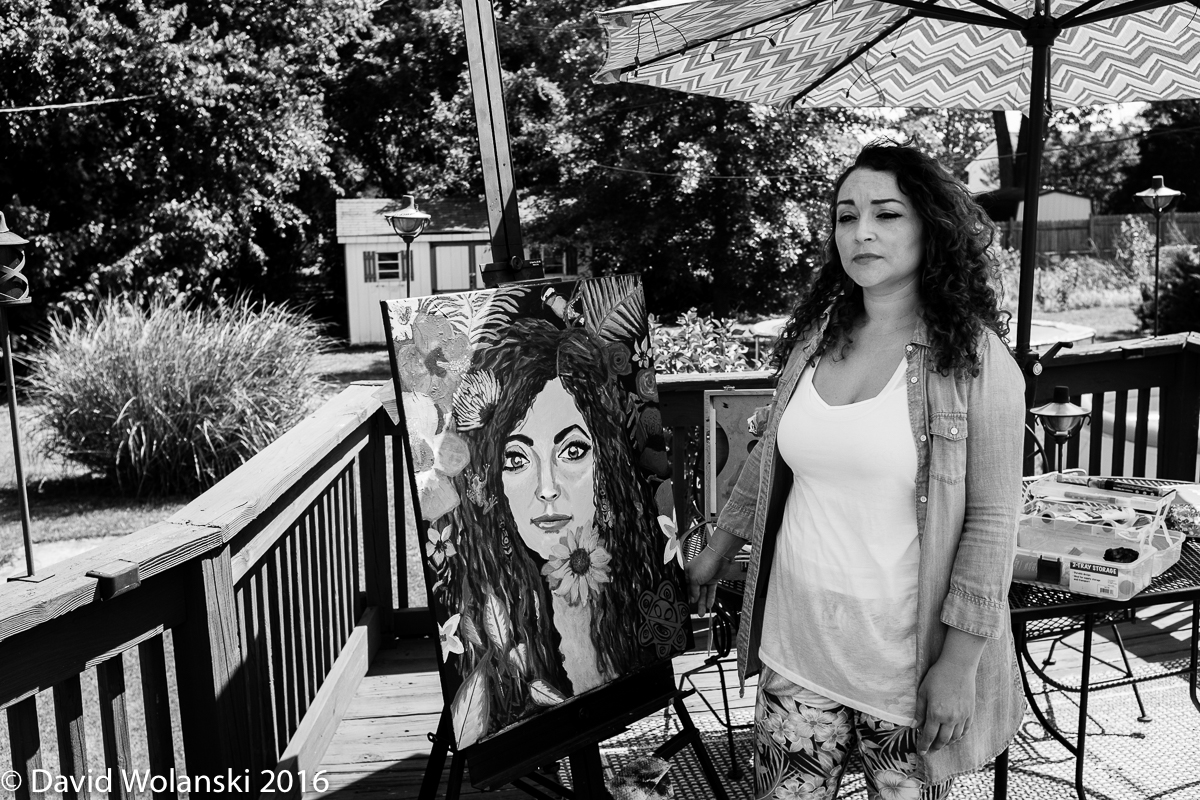 Natasha, thanks for allowing me to visit you in your space and so openly sharing your truths with me and the world. And, just as importantly, making and sharing your art.
Natasha’s work is currently on view and for sale at the Dover Art League in Dover, DE.