I’ve been shooting sunflowers in a local field for a while. I decided to go and see how they are coming along this year and try some film shooting if I had the chance. I took my Holgas, and a few other film cameras along. Here are the Holga images I liked. I shot these using the classic Kodak Tri-x film and decided to try semi-stand developing using Rodinal 1:100 for an hour. Part of the reason to use the stand developing was so I could soup the film, then run over to Walgreens to pick up the 35mm film I shot and dropped off for one hour developing. I’ll post those 35mm photos in another post.

I think this was the result of not getting the Bulb/normal button all the way into the normal position, so the shutter got left open longer than it should have, and I got blur. At first I was going to delete it, but then I decided I liked it as kind of an impressionist photograph. Love to hear your thoughts. I liked this with a sepia look along with a few others in this group. I achieved that in Lightroom 4.1. 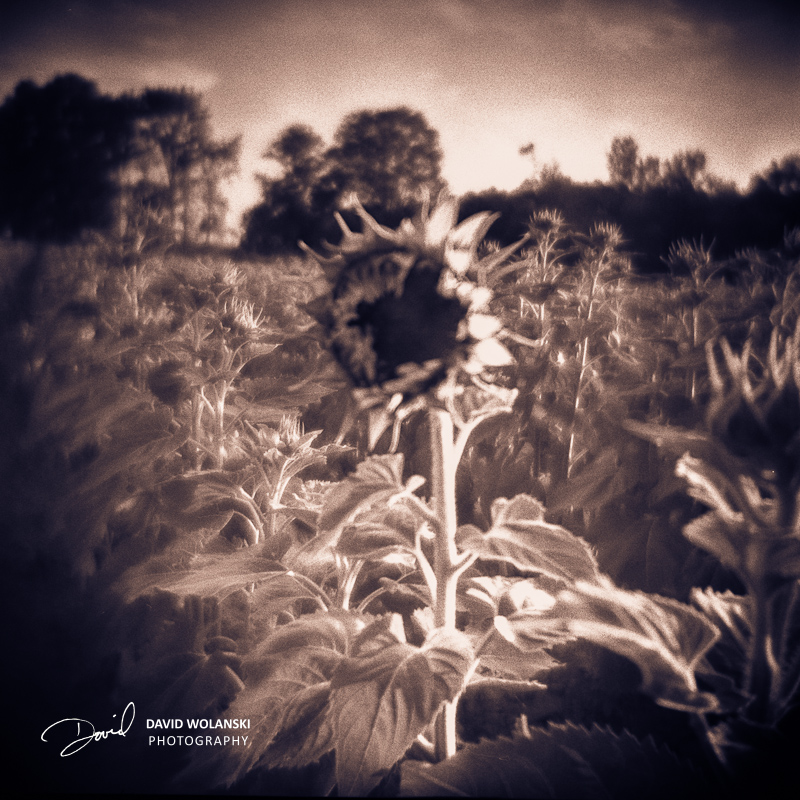 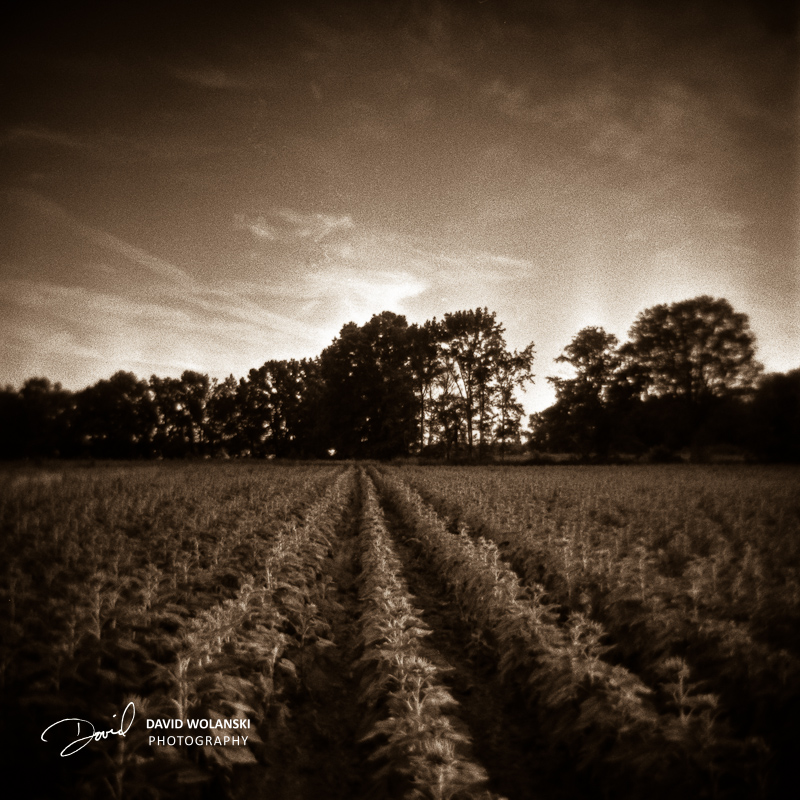 There is a blooming sunflower at the bottom of this photo. At first I thought it was the only one in the field, but soon saw there were just one or two other sprinkled in. I liked the way the lines of light colored plants led to the dark wall of trees and medium grey sky.The sunflowers are nicely lit from the sun that is camera right near sunset. This golden hour lighting isn’t as pretty in black and white as it is in person, or in color film, but I do like the repeated pattern of light and less light (can’t really call it dark!) of the flowers. 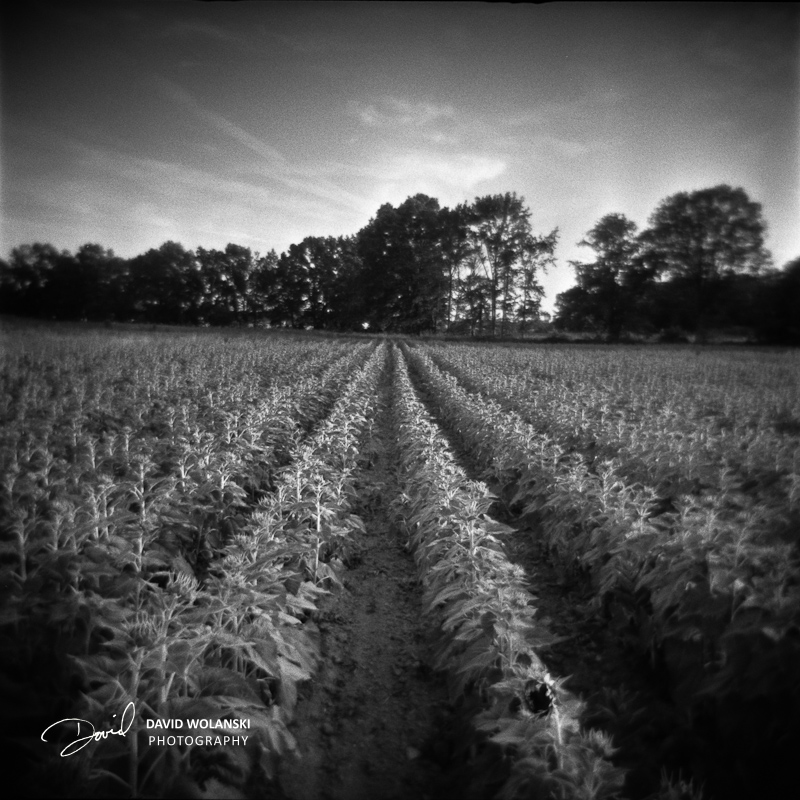 I think I saved the best for last. I like the lone blooming sunflower being accented in this photo. Since it’s one of the brightest spots in the photograph, our eyes are drawn to it quite naturally. One thing you might not notice if I didn’t point it out is the kind of halo effect above the trees in the background. That’s the result of bromide drag and might be considered a flaw in a negative from a typical camera. In this case, it just adds to the image, so it’s all good. I think the stand developing led to more grain than I’d get with regular D-76 or even standard development times in standard mixes of Rodinal, for example 1:25 or 1:50 ratios.

What do you think? Is the last the best? Does the haloing matter? Did you even see it? 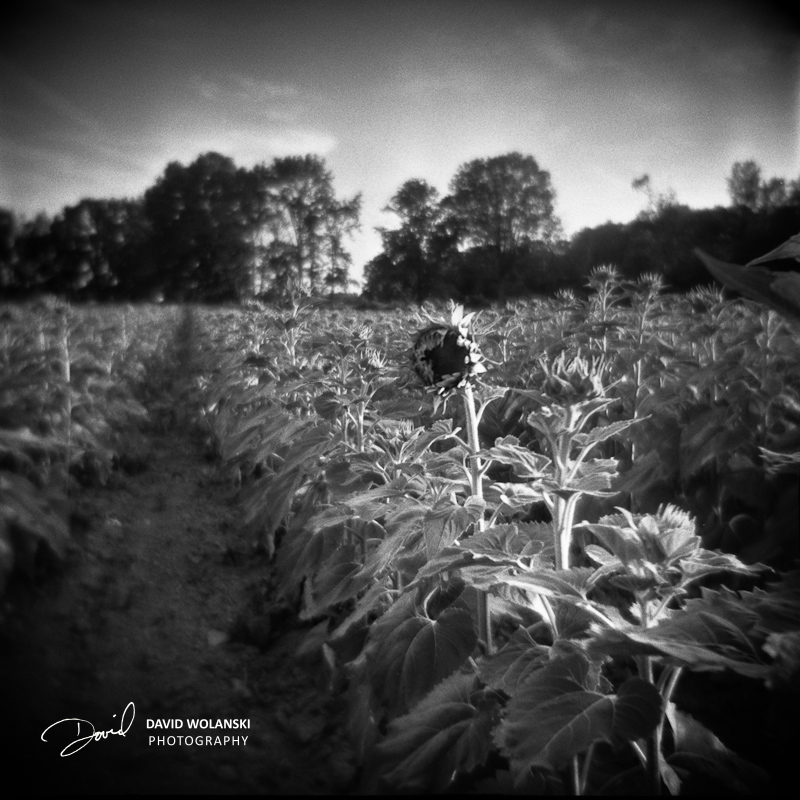 It was pretty foggy one morning last week and I headed out to follow my nose and see what I could get into. I ended up at Silver Lake and parked in McGlynn’s Pub parking lot and found a few images I liked. McGlynn’s could be part of my Used to Be series as it used to be the location of The Blue Coat Inn, a restaurant that was there for many years. The owner of the restaurant apparently tried to put a hit on the owner of the building when the arrangement they had went south.

I’m loving my Holga images that I’m getting with the camera I got from Randy at Holgamods. He massages them to get the best performance possible. One of the things he did was to measure the focusing distance of the lens so I can have a better idea of exactly where to set the focus. For the images that follow, it’s really irrelevant, because they’re so far away, I can just use the infinity focus.

Too much camera geek talk.

Here are the photographs.

This first one reminds me of some of the Monet Bridge paintings. Not that I think I’m Monet with a toy camera! 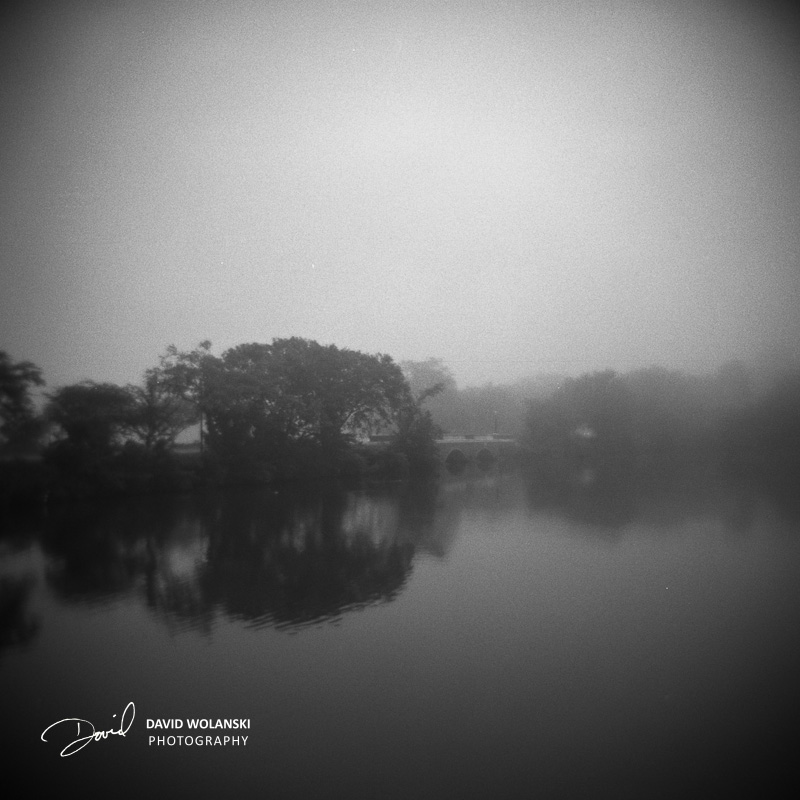 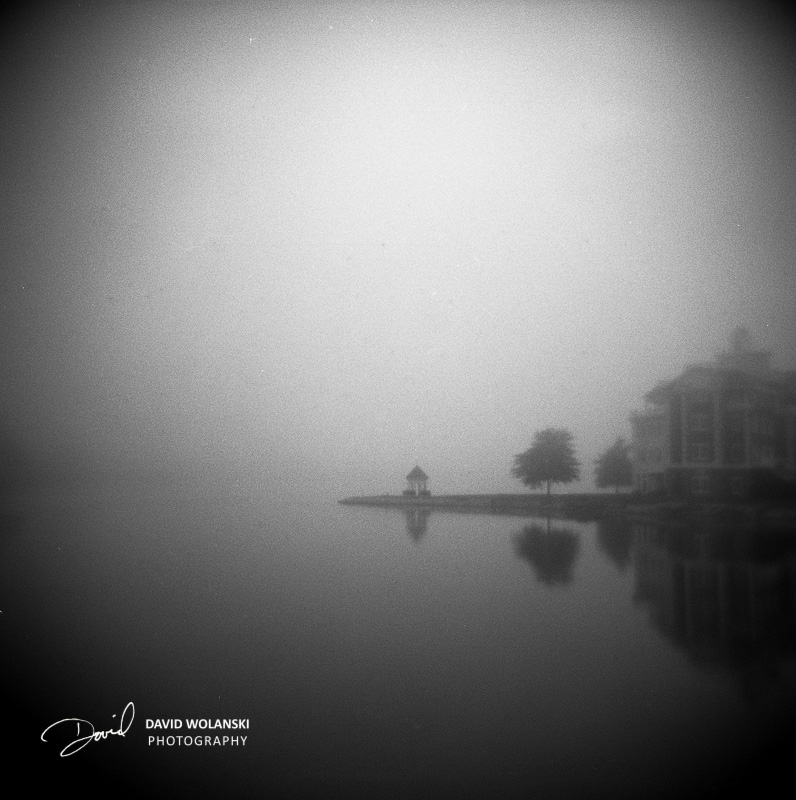 So, I made a new word up. I’m an artist I can do that. I think a lot of my photos, especially my Holga images are best when they hint at a movie that’s never been made or seen, except in our minds. When they have that cinematic feel, I connect with them on some level. This photo was done somewhere on the Eastern Shore of Maryland. I’m not sure of exactly where it is because it was the result of me following my nose on a drive. This kind of reminds me of the movie “Psycho” or the TV show “the Adams Family”

I’m fascinated with the old places. This was someones pride and joy when built. I imagine many children playing in the yard. Now, it’s been abandoned to the elements. What happened? Was the only son killed in a war? Did the parents die and leave orphaned children to be sent off out of state? 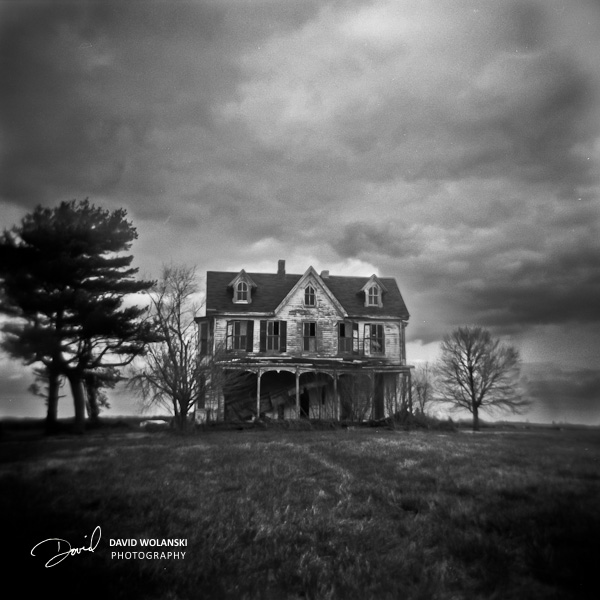 What story does it bring to your mind?